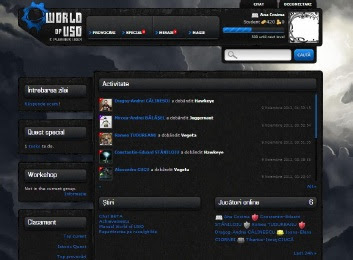 When Razvan Rughinis began teaching the introductory operating systems course at University Politehnica of Bucharest in Romania 10 years ago, he was challenged to get students interested in Linux and keep them interested for the entire three-month course.

Many first-year computer science students have no experience with Linux, and they have no interest in learning it, said Rughinis a professor in the Computer Science and Engineering Department. And those students who do know Linux are regarded as unusual and treated as social outcasts, he said.

"They wouldn't pay attention to the first experience to see what Linux has to offer; not just the desktop, but how the services work and the depth of the system," he said. "It's a steep learning curve for students coming from high school. Their first encounter was too difficult."

To help his students get interested in and engaged with Linux, Rughinis created World of USO, an open source, interactive online game that teaches the basics of the operating system at the same time it encourages participation and competition. He's now run the game the last eight years, with great results.

Participation is completely voluntary and isn't tied to the students' grades in the course. Still, about 60 to 70 of his roughly 300 students each term participate. They do it largely because it's fun, according to student surveys, but those students who participate also, not surprisingly, end up doing better in the course.

"My main focus is on building confidence in a completely new environment with this gamified platform," Rughinis said. "They learn that they can interact with Linux and they can do things that they can't do with other operating systems."

Three Levels of World of USO

The game presents a series of quiz-style multiple choice questions, that take about 2-3 minutes per day to answer. The questions are easy, in order to help students gain confidence, and can be answered with a simple Google search. This is the first layer of engagement, Rughinis said.

The second layer is a social component. Students can challenge each other to duels to test their Linux knowledge. Both students receive five questions at a range of difficulties. The one with the most correct answers, wins. This helps foster competition and also drives adoption of the game as participating students challenge their friends to join.

The last layer happens about 5 weeks into the game when they launch a quest. It starts at level one with a simple question and gets progressively more difficult as it builds to level 40. Students receive points not only based on correct answers, but also on how quickly they complete the quest.

"The best students would take 30 hours, working in hackathon style, doing just this for three days in a row," Rughinis said. "This is possible because we built up the community. They're very motivated because their achievement would be relevant to a lot of students."

At the end of the course, the students not only learn Linux, but want to learn more. And those with the most knowledge are viewed as heroes and champions. (The first-place winner gets a t-shirt.) Many have also pursued careers in Linux and open source software after graduation, Rughinis says.

Laura Vasilescu, a former Linux kernel intern through the Outreach Program for Women, finished fifth in World of USO when she took the class in 2008. Like most, she started with zero knowledge of Linux and programming. She was good at physics and math and wanted to learn how to build intelligent robots.

"During my first semester I had USO (Razvan's course) and that gave me a completely different view about what I would like to do and what I really wanted to learn. For me, the course was more like an umbrella where I developed my geekyness," Vasilescu said. "The game gave me the excitement and motivation to learn how to master the CLI... and it gave me a technical direction: operating systems and low-level programming."

She is now involved with the Romanian Open Source Education organization, pursuing her PhD in computer engineering, and is a teaching assistant at the university.

World of USO was developed over several years by Rughinis and a community of about 40 other contributors, including graduate students and former graduates of the course. The source code is open and available for download on Github, though there is quite a bit of customization of the game's content, based on the course materials and objectives.

"If you agree with the curricula we are following you can use it out of the box," Rughinis said. "But it is adaptable and we can help with customization, and it would be a great experience if any other university would be interested to lend a hand."