If you are using extensively the Storage XenMotion feature in XenServer, you probably encountered some limitations.

Let's recap first what is XenServer Storage XenMotion and then a limitation you can discover while using it.

What is exactly "Storage XenMotion" in XenServer? Well, it's the ability to move a VM within it's storage in live, without service interruption, even between hosts sharing nothing.

As you can see, that's more than very convenient in a lot of cases. So what's the big deal?

Imagine you want to migrate all your VMs on another pool. Let's say 6 VMs. Today, with XenCenter or xe, you need to do it manually for each of them (painful if you have e.g 20 VMs!).

You could already do that with Xen Orchestra: 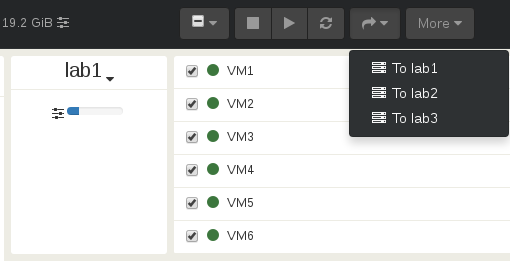 But only 3 will actually migrate, because XenServer has a built-in limit: no more than 3 Storage XenMotion at once on the same destination.

To keep our example with 6 VMs, when we start to migrate all the VMs at once, we got an error from the API of XenServer (XAPI): TOO_MANY_STORAGE_MIGRATES(3)

Now, to avoid manually migrate VMs 3 per 3, we catch this exception for each failed VM, and we try again seconds later. This way, as soon one of the migration is finished, the next VM asking to migrate will pass. Until every VMs made it!

You can now migrate using Storage XenMotion any number of VMs, and just let the process finish itself!