This week at Black Hat and DEF CON, Cisco security consultants Alfonso Garcia Alguacil and Alejo Murillo Moya will deliver a presentation, called "Playback: A TLS 1.3 Story," about some of the known security implications of using 0-RTT and will show proof of concepts of some attacks that have been seen in real-world environments. The intent is to raise awareness across the security community about that new feature. The presentation will be presented at Black Hat USA 18 and DEF CON 26. Attendees will learn about TLS 1.3 0-RTT, see some examples about how an attacker could take advantage of that new feature and get an understanding of the security implications of enabling the feature and how it could be used safely minimizing any potential security impacts.

TLS was born as a substitute of the ancient secure sockets layer (SSL) protocol, which was starting to show its age and was open to multiple types of attacks. The first version of TLS, 1.0, was created in 1999 and it was based on SSLv3. Since then, TLS 1.1 (2006) and TLS 1.2 (2008) were created to improve previous versions of the protocol, solving some of the security weaknesses that security researchers discovered in the past two decades.

TLS 1.3 is the new protocol version. It is not officially released yet, but it is in the final stage, just waiting for the final approval. In any case, some important vendors and open-source projects are currently supporting it. The TLS 1.3 Working Group released multiple iterations (drafts) that refined and improved the protocol in the past four years. One of the outcomes of that hard work is that TLS 1.3 has been simplified, and several vulnerabilities were fixed. For example, in TLS 1.2, the number of ciphers supported was high — maybe there were too many — and the working group decided to limit this new version to support only five ciphers.

TLS 1.3 has also introduced a new feature to improve the performance of new connections. The name of this feature is "0-RTT" (zero round trip time resumption) and it resumes sessions faster that can push data to the server without needing to wait for a server confirmation. 0-RTT makes this possible, as it reuses cryptographic information obtained in the first connection to the server. The following diagram shows how TLS 1.3 0-RTT resumption works: 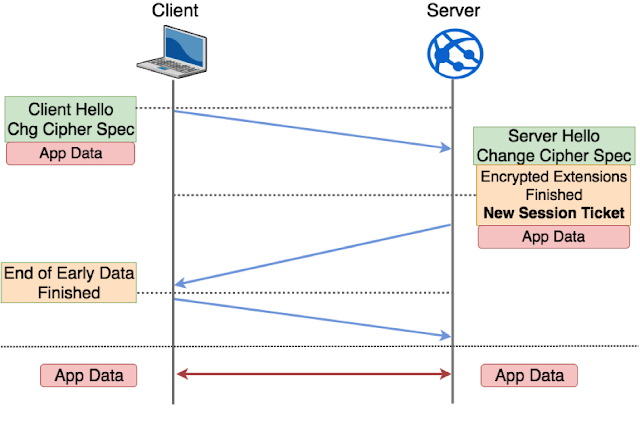 This can improve performance, but it has some known security implications.

For all of the Talos-related fun at Black Hat and DEF CON, be sure to read our complete guide here.

We are looking forward to meeting and seeing everyone at Black Hat and DEF CON. Be sure to come by booth #504 and say hello. And, of course, pick up a new, limited-edition Snort pig for your collection.