Docker has evolved tremendously over the last 3 years to empower developers and IT operations teams to maintain greater control over their own environments without sacrificing agility. From an ops tool used by the original dotCloud team, to Docker's commercially supported Containers-as-a-Service (CaaS) platform, Docker Datacenter (DDC), Docker has been at the forefront of this evolution.

Today we are excited to announce the next evolution in the Docker story providing enterprises with infrastructure optimized for the Docker platform with the leading provider of cloud infrastructure – Hewlett Packard Enterprise (HPE). Together, Docker and HPE will deliver integrated and fully supported Docker ready HPE x86 servers, bundled with Docker's commercially supported Engine (CS Engine) right out of the box.

This collaboration helps businesses transform and modernize their datacenters to benefit from a more agile development environment. With new Docker ready HPE servers, IT organizations have the ability to easily move from test/dev to production and achieve a highly available, secure environment at enterprise scale for Dockerized applications that work with HPE's extensive enterprise management tools.

Let's dig into some of the things Docker and HPE are doing together.

One of the hurdles we wanted to address was to enable customers get from zero to Docker as quickly and easily as possible. Many businesses still own and maintain physical datacenters that host any number of applications and data. For these organizations, server provisioning and configuration time is tantamount to business agility.  We've been working with the HPE team to ensure that all HPE x86 servers have been tested and validated with Docker CS Engine pre-configured, guaranteed with support from HPE that is backed by Docker to run Enterprise-grade applications in production.

Once up and running, these Docker hosts can be a destination for any new Dockerized distributed application, containerized traditional app or can be used independently to power CPU-intensive build systems. As the foundation for a modern application platform, the Docker ready HPE servers can then be provisioned with Docker CS Engine, and managed at scale with Docker Datacenter in an on-premises Container-as-a-Service (CaaS) environment. While Docker Datacenter (DDC) helps businesses build, ship and run their Dockerized applications on any infrastructure, we understand that there's more to IT Ops than an awesome container management platform.

We've got your back with Reference Architectures

Since we released Docker Datacenter and its components: Docker Universal Control Plane (UCP) and Docker Trusted Registry (DTR), we've had many customers deploy it on top of a variety of different infrastructure stacks, and we've learned a lot from their experiences to answer questions such as: Where do I put the controllers? How does it scale? How can I achieve the highest availability out of the platform? How well does it perform? In order to answer these questions and more, we partnered with HPE to build a complete end-to-end CaaS stack that has been validated, tested, and documented as part of HPE's Reference Architectures. The first of these is already available, and covers best practices for deploying Docker Datacenter running on HPE Converged Architecture 700 with Helion CloudSystem 9.0 Update 2. Additional Reference Architectures are being worked on and will become available in the next few months.

Extending the Enterprise experience with Plugins

The Docker philosophy "batteries included but swappable" is designed to provide flexibility and choice without a disruptive user experience.  Our open APIs and plugins for Networking and Storage allow our ecosystem partners to extend the capabilities of the platform to provide additional functionality tailored for different environments.

HPE has been busy working on both these fronts, first with the Docker Volume Plugin for the Flash-optimized HPE 3PAR StorServ arrays for deployments that require data persistence, as well as a Docker Network Plugin for the HPE Distributed Cloud Networking (DCN) solution for applying network policies, and connecting containers that are distributed across multiple hosts.

Getting applications up and running is just part of the equation. Production monitoring of systems and applications is critical to ensure performance and service levels.  HPE SiteScope is an agentless monitoring software for monitoring the availability and performance of Dockerized environments. It offers a rich catalogue of application/server/database/network/virtualization/cloud monitors and a wide array of solution templates that have built-in domain expertise and best practices. 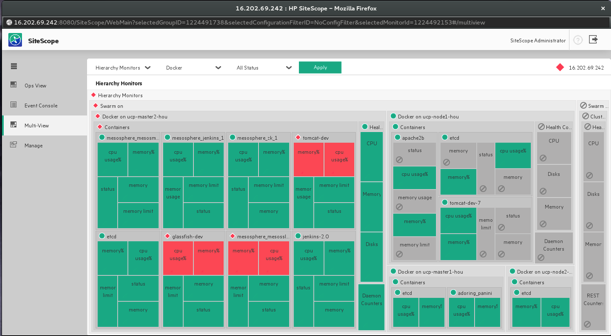 The latest version of SiteScope provides integration with Docker Swarm to monitor multiple layers of the stack:

HPE Sitescope is even deployed as Docker containers available from Docker Hub, and has been approved for the Docker Ecosystem Technology Partner (ETP) program for Monitoring.

We've made it extremely easy to get started by configuring and testing all the components allowing businesses to get up and running quickly with Docker and easily move their applications from test/dev to production. However, for more tailored design guidance to fit even the most demanding Enterprise requirements, and to meet the tight support SLAs that our production customers demand, we've partnered with HPE to offer L1/L2  support and consulting services in alignment with HPE's technology solutions roadmaps and SLAs, providing a single source of Docker support. In addition, HPE will provide technology assessments, design and implementation services for Docker (platform security, workload modernization consulting) from HPE Technology Services Consulting Services.

For more information on Docker, watch the on-demand webinar Docker 101 and then join us on Thursday, June 16th at 10:00 am PST for our webinar Containers for the Virtualization Admin.

Read more about Docker and Virtualization in the blog series by Docker Technical Evangelist Mike Coleman:

To start learning more about Docker and containers, check out these additional resources: